During the New Kingdom the dead was buried with rolls of papyrus containing passages of “The Book of the Dead”. That meant that the artist of the Ancient Egypt applied over this new surfaces a decoration took from the general corpus of images they had. 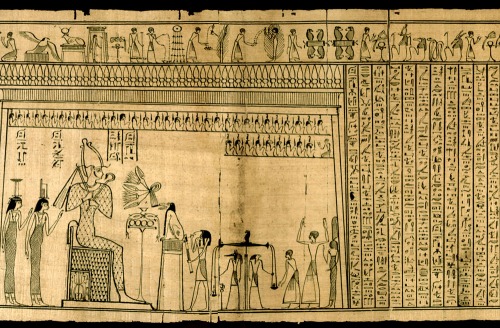 One of the most common scenes in those papyrus was the one with Osiris resurrected over his throne and followed by the images of Isis and Nephthys. Our focus is on how these two professional mourners were depicted.

The artists of Ancient Egypt drew on papyrus with the same techniques they used in other surfaces. Very usual were the superposition and the juxtaposition for depicting pairs, groups (of people, animals…), and amounts of things…. The first one consisted in drawing every single image just besides to another, this way we can see clearly all shapes; the second one consisted in making every image one over another, so just the one on first sight is completely drawn while the artist made just some contours of the rest.

Relief with superposition from the tomb of Kagemni. Photo: http://www.osirisnet.net