The Ancient Egypt burial and rebirth “narrated” in a fragment of a coffin.

Today I would like just to stress the importance of watching well the pieces in museums all over the world for knowing better Ancient Egypt.

Usually people focus on travelling to Egypt or on watching those big pieces in great museums. It is obviously necessary (if not essential) both. But we cannot undersatimate less famous museums and pieces, which also show us so much about Ancient Egypt culture. 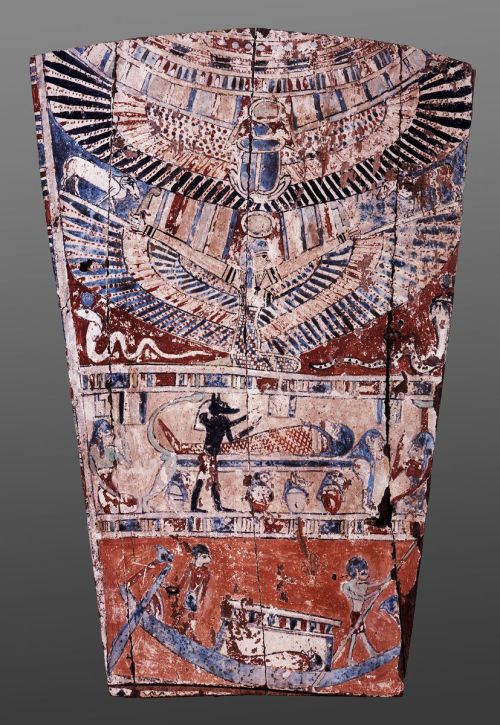 Fragment of a coffin. V Century BC. Museum of Fine Arts in Budapest.

This is the case of this fragment of a Egyptian coffin dating from the Late Period in the Museum of Fine Arts of Budapest. Apparently the images here are the usual funerary images we can find in some other formats for Ancient Egypt art (walls, stelae…). And it fact, they are. But, we are facing different scenes in the same surface. The point is: are they independent? or Are they conected and telling a sequence?

Probably many “western” visitors looking at that piece would watch it from top to down. So, first the scarab, second the winged goddess Maat, then the mummy with Anubis and the two mourners Isis and Nephtys, and finally the mummy on the boat. In that order, there is no sequence at all.

However, the decoration is on a sacred surface, on a funerary surface, and had to have a funerary meaning. Because in Ancient Egypt belief, the art had a practical purpose. In this case, and taking into consideration that these images belonged to an Egyptian cadaver, they had to be there related of the resurrection of the mummy.

The corpse neing transported to the necropolis.

Firstly the corpse was transported to the necropolis and he/she had to to cross the Nile, and that is what the Egyptian artists drew at the bottom of the piece.

Restoring rites. Anubis emblaming the corpse and Isis and Nephtys at both ends making the mourning rite.

Once in the necropolis took place the restoring rites for giving back the life to the death. That is, Anubis embalming the mummy and the two professional mourners in the role of Isis and Nephtys making the mourning rite for giving back the vital faculties to the body. 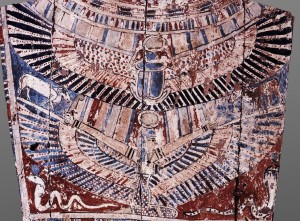 The winged goddess Maat, Egyptian goddess of order, truth and righteousness; and the scarab with the solar disk, Egyptian icon of rebirth.

Afterwards the dead entered in the Hereafter, but before being accepted there he/she had to overcome the final judgment (psicostasia). Here the dead had to show that on earth he/she had behaved following the Maat’s rules, that is correctly, since she (here the winged goddess) was the goddess of order and righteousness.

Once it was proven that he/she had been righteous, he/she could enter into the Heaven. The final resurrection was a fact. The scarab with the solar disk is a typical Egyptian icon of rebirth.

Summing up, this fragment of coffin should be “read” from bottom (funeral) to top (resurrection); only like that the two middle registers have a meaning: the restoring rites and the final judgment.