The First Moment of the Death in Ancient Egypt. Tutankhamun’s Tomb

The tomb of Tutankhmun is more than a mask, a mummy, Howard Carter… It is an historical document with lots of useful information about the funerary belief in Ancient Egypt. Let’s focus now on the funerary chamber.

The decoration of the funerary chamber.

The funerary chamber of Tutankhmun is the only decorated room in the tomb. The decorative program is not the typical one for a royal burial in Ancient Egypt. Starting from right to left, we find a secuence of images with contains a logic. 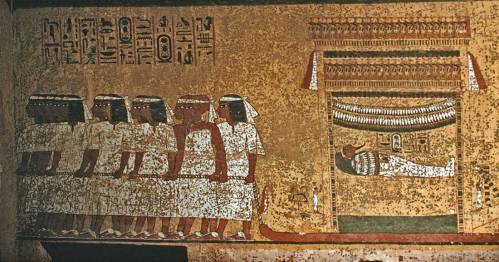 On the East wall the funerary cortege is dragging the mummy of Tutankhmun on his sledge to the tomb. That is, Tutankhamun is being taken to the world of the dead; he is facing the first moment of the death in Ancient Egypt.

On the North Wall, the Egyptan artists depicted, on one hand,…

A lament in Amarna made by common mourners.

Iconography proofs the existence of a mourning practice in Amarna.

Specially relevant is the Royal Tomb, where the funeral of Meketaten, the royal daughter, was depicted.

The death of Meketaten was lamented by the royal family, that is Akhenaten, Nefertiti and the three sisters, Meritaton, Ankhesenpaaton and Neferferuaton-ta-sherit, but also by a group of mourners. 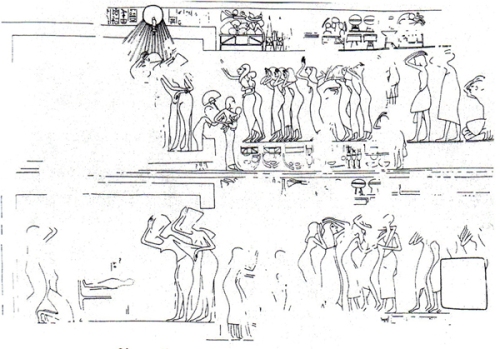 These scenes of lament in Amarna were sculpted in rooms alfa and gamma and they merit to be observed in more detail.

Let’s watch first at the mourning scene in room alfa.

Here the scene of lament happens in two registers.

During the reign of Akhenaten, iconography coming from tombs of Amarna show mainly scenes of the “living ones”: Sculptors in the workshop, worship of the Aten, the activity in the palace, the royal family in the “Window of Appearance”…

Depictions relating the death are just a few. Here we will mention the tomb of Huya.

The corpse of Huya inside his coffin is standing…

Funeral of Huya depicted in his tomb. Photo: Amarna Project.

During the reign of Akhenaten many things changed in Ancient Egypt. The new Pharaoh modified the artistic canon, his residence, the religion, the cult…but what happened with the death?

Those ancient Egyptian people from Amarna…did not die? Yes, they did, there was a cemetery. There were also mummies and coffins.

People continued being buried into tombs; and the walls of those tombs were decorated with reliefs. That is, there was a funerary art and a funerary architecture. A mortuary practice existed.

Isis and Nephthys on the Neck of a Mummy.

Thanks to the many artifacts of Ancient Egypt found mainly in tombs, we know many aspects of the habits of ancient Egyptian people.

However, the archaeological remains need also to be interpreted.

For instance, why was the mummy buried sometimes with small female figurines? Any text says a clear explanation, but we can assume that they had a regeneration goal, so we consider them as ancient Egyptian fertility statuettes.

The mummy of Djedptahiufankh, Fourth Prophet of Amoun, dates from XXI dynasty and was discovered by Gaston Maspero, among many other ancient Egyptian mummies, in the cache DB 320 of Deir el-Bahari.

Maspero found the corpse intact and he partially unwrapped it. He found some amulets typical of the Ancient Egyptian burial custom: a lotus flower, a heart scarab, a figure of a hawk made of silver… According to the sources, he also found the figure of two serpents made of some unspecified material on the neck of the mummy.

The snake was a very common symbol in Ancient Egypt, but why had Djedptahiufankh a pair and on his neck? No inscription, no text…so we have to look at what we know about the funerary ritual in Ancient Egypt and the coincidences we can find when thinking of it.

Art or Craftwork in Ancient Egypt?

We have been lately writing about the artwork in general. The artwork is a human production conditioned by the author’s skills, by the historical moment and the place where it is produced. Ancient Egypt was not an exception.

The Avenue of the Sphinxes in Karnak. Is every sphinx an artwork? Photo: www.dailymail.co.uk

The big question also for us is, can we speak about artwork in Ancient Egypt? Or must we talk about craftwork?

According to the experts, an artistic creation needs the following five properties which mark its nature:

These women could raise their arms as if they were praying to the gods the return of the dead.

Some times their hands appear over their heads as beating them in an evident show of despair. 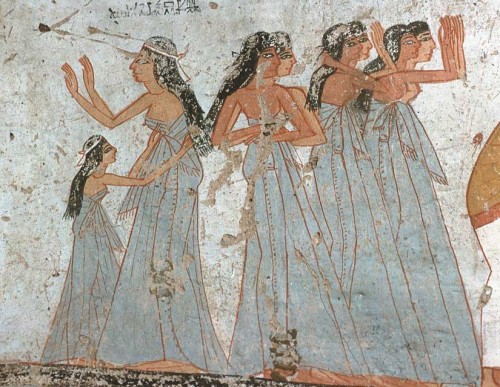 The ancient Egyptian mourners also put their hands in front of their eyes, maybe in an intention of showing the human reflect of covering the eyes (and also the face) when crying.

The artist of Ancient Egypt found also the way of depicting the sadness movements of those women by drawing their hands holding their back of the neck, crossing their arms on their chests, kneeling and/or bending their bodies forwards. 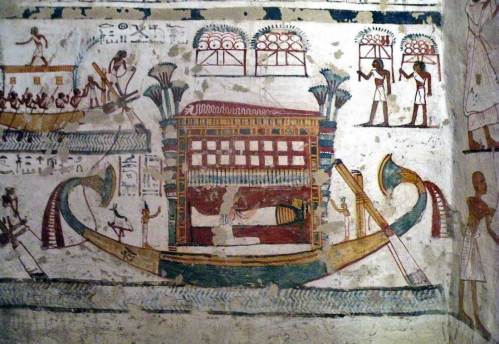 The wife is kneeling and crying, Isis stands on the left and Nephtys on the right. Painting from the tomb of Samut in Assassif. XIX Dynasty. Photo: http://www.osirisnet.net

But those gestures were usual in common mourners. What about the two professional mourners in the role of Isis and Nephthys?

These two women shared with the formers ones many of these gestures, but not all of them.

The Art of Ancient Egypt. A short Reflexion.

The art of Ancient Egypt has a very big interest from the esthetical point of view. But its composition, its scenes, its colors… have always a specific meaning.

Before getting into the art of a moment of the history, we should mention some theoretical matters about art and history. Because any artistic expression needs to be understood in space and in time. Ancient Egypt is not an exception. 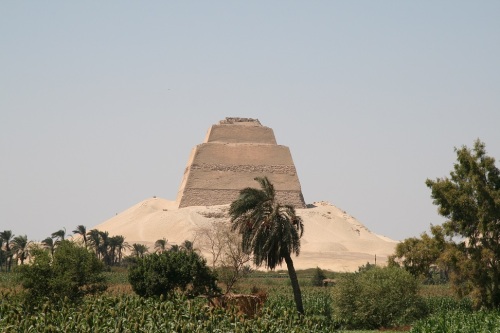 In every artistic production there are two main components: esthetic (the appearance the artist wants to give to the work) and the technique (the work procedures). But the art is closely united to the human feeling, his conception of the world, his religious and/or spiritual beliefs. At the same time the artwork is integrated into a country, a region, a city… 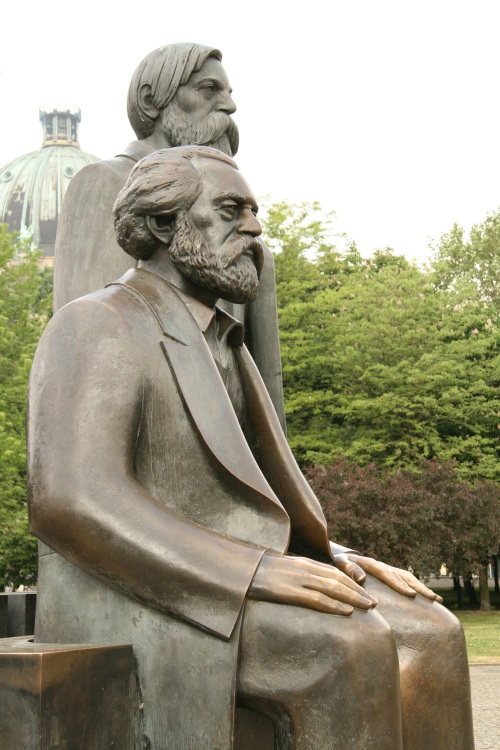 Many statues spread in our nowadays cities are a good proof of it. For instance, the monument of Marx and Engels in Berlin is a result of some techniques, but there is also in it an intention of political propaganda. This artwork of the sculptor Ludwig Engelhart would not have existed out of the Marxist historical moment.

Isis and Nephthys overlaped behind Osiris in a Papyrus from Turin.

The artists of Ancient Egypt had a particular conception of perspective, which affected in the way they depicted groups of living beings and amounts of things.

In our last posts we saw how in Ancient Egypt the funerary scene of Osiris being flanked by Isis and Nephthys was usually depicted with the two mourners of Osiris juxtaposed. It allowed to draw Isis always preceding her sister Nephthys and to make both images complete, so effective for the dead’s resurrection. 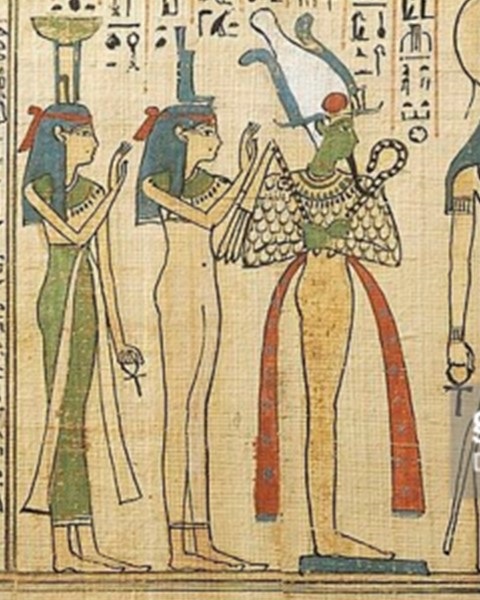 Isis and Nephthys juxtaposed behind Osiris. Book of the Dead of Khonsumes.

But the ancient Egyptian artisan could also use the technique of superposition for drawing collectives of people (troops, groups of workers…), of animals (for instance flocks) or amounts of objects (offerings, vases…).

The superposition was also applied to the scene of Isis and Nephthys behind the resurrected Osiris on his throne. We can see it for instance in the famous Papyrus of Ani from the XIX Dynasty and in many others.

During the New Kingdom the dead was buried with rolls of papyrus containing passages of “The Book of the Dead”. That meant that the artist of the Ancient Egypt applied over this new surfaces a decoration took from the general corpus of images they had.

One of the most common scenes in those papyrus was the one with Osiris resurrected over his throne and followed by the images of Isis and Nephthys. Our focus is on how these two professional mourners were depicted.

The artists of Ancient Egypt drew on papyrus with the same techniques they used in other surfaces. Very usual were the superposition and the juxtaposition for depicting pairs, groups (of people, animals…), and amounts of things…. The first one consisted in drawing every single image just besides to another, this way we can see clearly all shapes; the second one consisted in making every image one over another, so just the one on first sight is completely drawn while the artist made just some contours of the rest.

Relief with superposition from the tomb of Kagemni. Photo: http://www.osirisnet.net

HAIR AND DEATH IN ANCIENT EGYPT
Create a free website or blog at WordPress.com.