An Egyptian Ostracon with a Disheveled Mourner.

Funerals of Ancient Egypt are usually known thanks to funerary scenes from the tomb walls. However, small objects can also give a very useful information.

That is the case of a limestone ostracon from Thebes and in the Manchester Museum (Acc. no. 5886), which dates from the New Kingdom. An Egyptian artist drew on it an ink sketch with a scene of a funeral.

The scene represents an Egyptian burial (there is a post written by Campbell Price in the blog ofthe Manchester Museum). The plan of the tomb is seen from a bird’s-eye view, while the members of the funerary team and the coffin are shown from a front view (the combination of different visual plans was normal in Egyptian art).

Outside the tomb a group of mourners are standing while weeping and a priest is with them burning incense and pouring water. Although it is not too clear, it seems that the artist pretended to draw one of these women with a lock of hair falling in front of her face. It should be pointed out that, while the three others appear with her raised arms, the mourner with the hair falling on her face has her arms hanging down.

Why? Egyptian artists had several ways of representing the lament: tears droping on the face, raised arms, arms crossing on the chest, hands covering the face, hands over the head, hair falling forwards, hair covering the face…Probably the artist who drew this sketch chose to represent three common mourners with raised arms and another one with hair falling on her face. 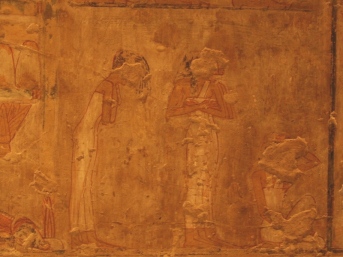 In fact, a very similar solution found the Egyptian artist  in the tomb of Rekhmire (TT100), where some mourners are kneeling with their hands on their head, some others are standing with crossed arms on their chests and another one stands also with crossed arms but with the mane of hair covering her face.

Painting from the tomb of Amenemhat (TT 82)

Also in the tomb of Amenemhat (TT82) we can see a group pf common mourners among who, some raise their arms, some cover their faces with their hands and two make the nwn gesture of shaking hair forwards. With them a priests holds an incense burner and a purifying water vessel. The same scene as we can see in the ostracon of the Manchester Museum.

The scene of this ostracon could be considered as an schematic way (or an “ostracon version”) of the nwn gesture made by a common mourner.

One response to “An Egyptian Ostracon with a Disheveled Mourner.”