Shaving the Mourners in Ancient Egypt during the Old Kingdom.

Shaving the Mourners in Ancient Egypt during the Old Kingdom.

We have already seen that there are proves of a practice in Ancient
Egyptian funerals of cutting and then offering the hair of the two Drty (”kites”), who made a mourning ritual in the role of Isis and Nephtys. Archaeological remains appear as the most numerous and they increase as history advances[i]. Anyway, again the New Kingdom offers more indices of it, with many scenes where these two mourning women (Drty) appear with short hair:

Funerals of Sobekmose with the two mourners (or two kites) with no mane of hair. Relief from the tomb of Sobekmose in el-Rizeikat. XVIII Dynasty. Photo: http://blog.naver.com/PostView.nhn?blogId=yjm3198&logNo=20127186648&categoryNo=16&viewDate=¤tPage=1&listtype=0

As we can see all these examples come from proximities of Luxor, except the one from Nefersekheru, which is located 10 km in the south of Minya in the Middle Egypt. So, at first sight we could imagine that cutting the hair of the two mourners Drty could be a practice made in the funerary ceremony of Upper Egypt and very usual during the New Kingdom. Does it mean that this practice becomes popular as time goes by in the south of the country? Or again does it come about by chance?

The Coffin Texts of the Middle Kingdom gives us indices of cutting the mourning women’s hair in Ancient Egypt funerals, so we have to suppose that this was not a new practice included suddenly in the sacred texts, but something already done previously and already inside the Egyptian religious belief.

Searching among the Old Kingdom iconography there are two much known tombs, the mastabas of Qar and Idu (V-VI Dynasty) and both located in Giza. The decorative program in these two Egyptian mastabas included scenes of the funerary procession and the tomb of Idu offers also a very interesting scene of mourning men and women who pull their front lock of hair as proof of desperation and sadness. However, as it happens in the most part of Old Kingdom iconography, in both cases it is not about a complete and explicit funerary ceremony as we can see later in the New Kingdom.

What it is important for us is that on both mastabas the two Drty (“kites”), who were the representatives of Isis and Nephtys during the Ancient Egypt funerals, appear with short hair. In Qar’s tomb a complete procession to the embalming place shows always the two Drty with short hair and the emblamer (wt) always present. 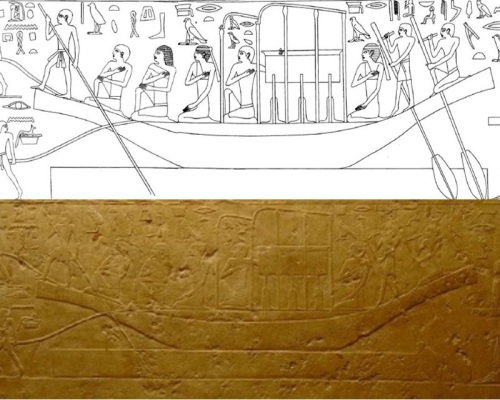 Scene of the funerary procession from the mastaba of Qar in Giza. The two Drty with no mane of hair are at both extremes of the coffin. V-VI Dynasty. Image from Simpson, W.K., The Mastabas of Qar and Idu in Giza. G 7101 and 7102. Boston, 1976, fig. 24; Photo: http://www.bridgemanart.com

In Idu’s mastaba again just a few scenes of the procession show the two mourning women (Drty) with short hair accompanying the coffin join with the embalmer (wt).That would be a proof of the practice of cutting the mourner’s hair also in the Old Kingdom. 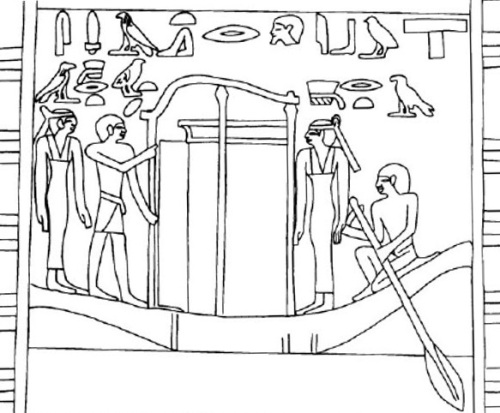 But, when observing these two tombs we realise that there are much doubts coming to our mind related to the funerary ceremony and the mourning ritual.

Are the Drty mourners with no mane of hair from the beginning of the Egyptian funerals as they appear in these scenes?

Is that decoration representing just the procession to the embalming place?

Are we reading those scenes in the correct order?

We will try to find the answer in following posts….

[i] It is also true that the remains from the Late Period come from a unique necropolis with ten tombs having hair offerings.

5 responses to “Shaving the Mourners in Ancient Egypt during the Old Kingdom.”