The wrong location of Isis and Nephtys in the coffin of Khnum Nakht.

In Ancient Egypt iconography Isis was mainly placed at the feet of the mummy, while Nephtys were at his head. That happened in tomb walls and in sarcophagi.

We have seen that this position was not accidental, but something deliberate. That typical icon of the mummy flanked by Isis at his feet and Nephtys at his head would remain two things. On one hand, it could represent a birth itself, when one woman gives birth (Isis) and being assisted by a midwife (Nephtys). On the other hand, it could refer to the mythical copulation between Isis and Osiris, so the goddess being at his feet would be ready for putting herself over her husband. 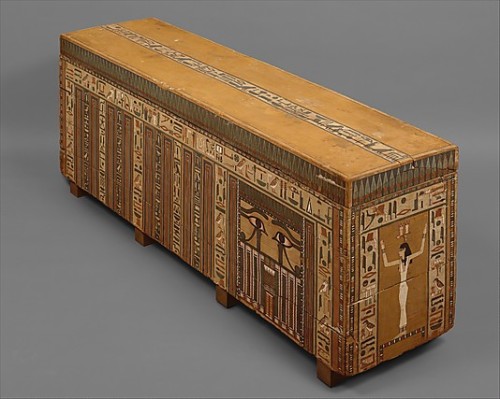 Coffin of Khnum Nakht. Head extreme with image of Isis. On the left the false door with the two udyat eyes indicating the threshold between the earthly world and the Afterlife. XIII Dynasty. Metropolitan Museum of Art of New York.

But, sometimes, Egyptian art surprises us with some exceptions. Looking at the coffin of Khnum Nakht in the Metropolitan Museum of Art of New York we realised that the decoration in it did not follow the rule we have said before.

The coffin of Khnum Nakht dates from the XIII Dynasty and comes from Meir (Middle Egypt). The decoration in it includes on the left side of the coffin the false door with the two udyat eyes. That indicates that the head of the mummy was located behind it. 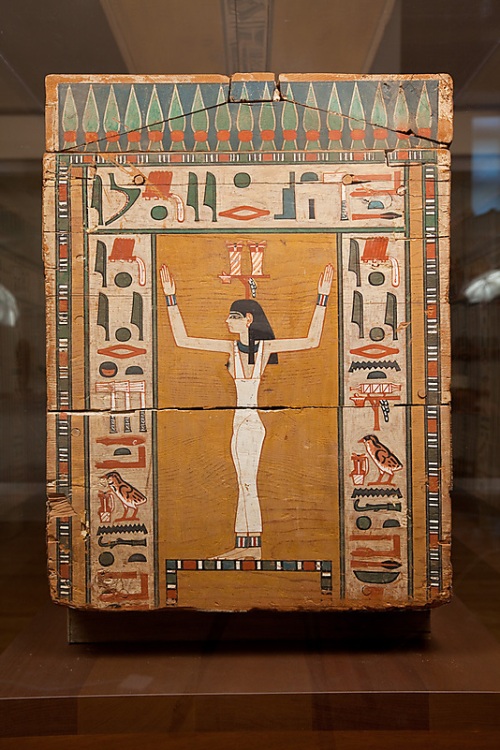 Coffin of Khnum Nakht from Meir. An image of Isis at the head extreme of the coffin. XIII Dynasty. Metropolitan Museum of Art of New York.

At both extremes of the corpse the artist placed two goddesses. At the extreme of the head appears a goddess with a strange standard on her head carrying two hieroglyphs of the sealed oil jar with unguent mrht or mDt. According to the inscription above, she is Isis the Divine (Ast nTrt).

At the feet of the coffin there is no image, but two paintings of the façade of the palace. However we know this was the place of Nephtys thanks to the inscription. 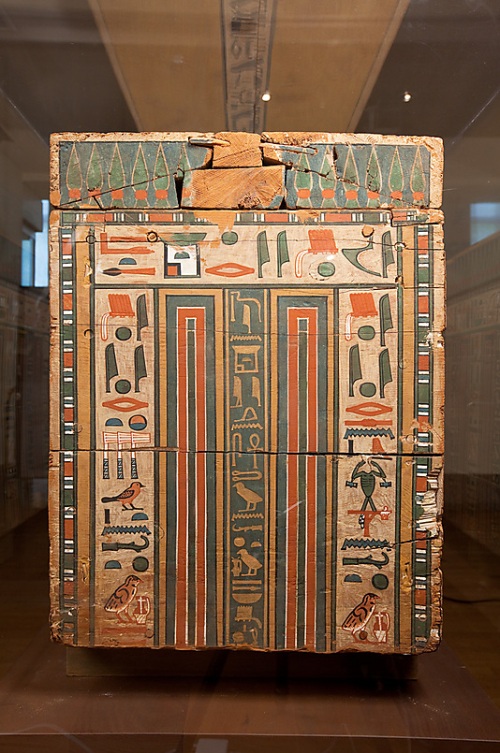 Isis and Nephtys were there, at both extremes of the coffin assisting in the deceased’s resurrection. But it is surprising to watch that they were not where they were supposed to be: that is, Isis at the feet and Nephtys at the head.

We do not why, but the artist who decorated the coffin of Khnum Nakht located the feet as the place for Nephtys and the head as the place of Isis.

Was it maybe just a mistake? The coffin is made with an exquisite technique, so the manufacturer was not a beginner. The coffin was decorated by an expert (or a team of experts).

Was the icon of Isis at the feet and Nephtys at the head of the corpse still not too consolidated during the Middle Kingdom?…

This entry was posted in 02. HAIR AND MOURNING WOMEN, 09. VARIA and tagged coffin, Isis, mourning, Nephtys. Bookmark the permalink.

One response to “The wrong location of Isis and Nephtys in the coffin of Khnum Nakht.”