The two Mourners Isis and Nephtys in the Egyptian Coffins of XI Dynasty.

In Ancient Egypt iconography Isis and Nephtys appeared at both extremes of the corpse, usually Isis stood at the feet, while Nephtys stood at the head of the mummy. However this position was not always like that. We saw on 18th March how at the Egyptian coffin of Khnum Nakht, dating from the XIII Dynasty and coming from Meir (Middle Egypt) had an excellent manufacture in the decoration but probably with the wrong location of these two goddesses; the inscriptions of the feet extreme of the coffin mention Nephtys, while at the head extreme was the figure of a goddess named as Isis.

Many coffins and model coffins (small model coffins made of wood contained figurines of the deceased and have been used in Ancient Egypt from the Middle Kingdom) from the Second Intermediate Period show the same location for both Isis and Nephtys. But if we look back to the XI Dynasty, we find that also that happened.

The model coffin of Queen Neferu dates from the XI Dynasty and comes from Deir el-Bahari in Thebes. The inscriptions on it show that the extremes of the coffin was already at that time reserved to the two mourners of Osiris, Isis and Nephtys. But, according to the inscription, the place for Nephtys here was the feet end of the box. 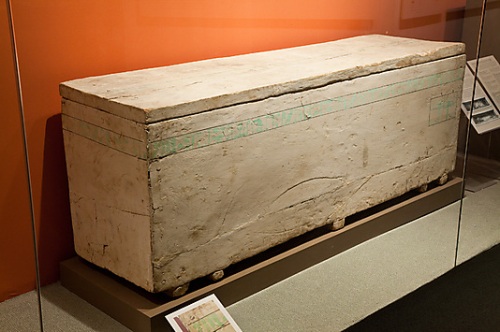 This is not the only example of that; the coffin of Child Myt, from Thebes and dated in the XI Dynasty, shows also an inscription at the feet of the box mentioning the goddess Nephtys.

The coffin of Princess Mayet dates from XI Dynasty and comes also from Thebes. The hieroglyphs in it shows clearly that the head end was the place for Isis, while the feet end was the extreme for Nephtys.

Coffin of Princess Mayet. At the feet end (left) the name of Nephtys. At the head end (right) the name of Isis. XI Dynasty. Thebes. Photo: Brooklyn Museum

This location of Isis at the head and Nephtys at the feet in the coffin is also visible in some Theban coffins from XIII Dynasty, as for instance in the coffin of Entemaemsaf, from el-Asasif. 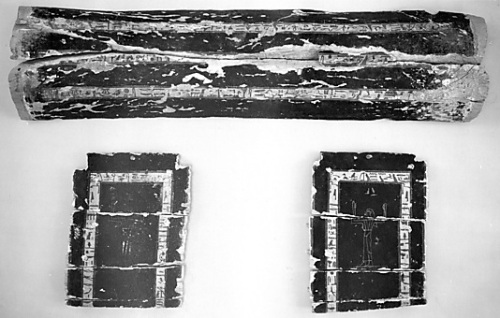 Coffin of Entemaemsaf. Isis at the head and Nephtys at the feet. XIII Dynasty. El-Asasif. Photo: Metropolitan Museum of Art of New York.

But it is not the only example…