The Hair sm3 and the Healing of the lunar Eye in Ancient Egypt. Part I: Chapters in Coffin Texts.

We have seen how the reading of the Coffin Texts shows many different aspects of hair related to renovating practices or regenerating symbols. The main symbol of renovation, resurrection and regeneration in Egyptian religion was the Udjat eye. The eye of Horus, injured during the fight against Seth, was identified with the moon, and the process of the increasing from crescent to full moon was assimilated with the combat between both gods. 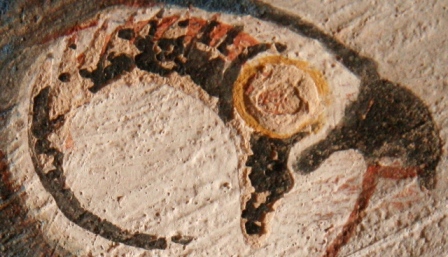 Eye of Horus, the falcon god. Detail from an image of Horus in the tomb of Roy in Dra Abu el-Naga. XVIII Dynasty. Photo: Mª Rosa Valdesogo Martín.

The full moon was the evidence of final victory of Horus over Osiris’s murderer, which finished with the resurrection of Osiris as king of the Hereafter.

Many chapters of the Coffin Texts mention the hair sm3 in an Osiris context of healing. Let’s have a look of each and deduce some ideas:

Everything has been given to me, I feel triumphant, and I stand up triumphant. I have created all my family, for whom I have spoken. I am Re, the sun’s father”

“…I treat the great god because of his harm

Which one is the suffering of the great god?

It is his head, his shoulder and his leg.

I came for spitting in his shoulder, for refreshing the hair sm3

And for healing the two legs of the great god…”

Shu and Thoth, beloved, being together behind the great god, Shu and the hair sm3…this N, has spitted (over) the hair sm3, this N has refreshed his vertebra. It is a medicine inside the body of this N…[4] »

He carries a leg and he gives breath to who does not have. This N has brought his ba soul; his has taken his power and magic ».

“…I have recovered the eye after it was damaged the night of the combat between the Two Fellows[5]. I have raised the hair from the Udjat eye when he was furious

We find a common denominator: the hair, mainly sm3, but in one case also Sni, is linked somehow to the Udjat eye, it gets involved in fight and suffers damage; in the mythic sphere this hair is treated and healed with a spit.

[1] iw sDm.n.f is a narrative tense and it stress a very important fact of the story.

Posted in 04. HAIR AND THE EYE OF HORUS