According to the Egyptian funerary texts the mourner/s crying close to the mummy were the representatives of Isis and Nephtys, in the iconography the inscription accompanying their/her image/s describes them/her as the deceased’s wife, widow or even servant; so stressing the wife’s role of Isis in the legend of Osiris.

They made a mourning ritual in some moment of the Opening of the Mouth ceremony, not only as a sadness proof but also as means of getting the deceased’s rebirth. Thanks to the decoration in some New Kingdom tombs from Thebes we can discern that it happened when the ox was slaughtered. 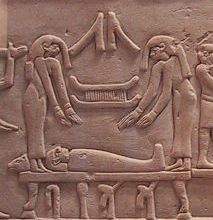 Mourners over the corpse. Detail of the stele of Akbaou. XI Dynasty. Photo: http://www.commons-wikimedia.org

From Egyptian funerary texts and from iconography the mourning ritual consisted in shaking hair and/or pulling hair towards the corpse. And presumably it ended with the cut of that shaken and/or pulled hair, which in the mythic sphere coincided with the offering of the Udjat eye to the deceased as a grant of his final resurrection.

At this “lunar” point the presence of two women in the rebirth process of the dead makes much sense. The moon is closely related to women, since it regularizes the menstrual cycle[1]. Scholar R. Briffault considered that in ancient Egypt women’s fertility depended on the moon and he assures the existence of a Theban inscription saying that women conceived thanks to the moon[2].  That point of view would give all the sense to the Osiris’ lunar rebirth, since thanks to it Isis could conceive Horus.

). According to R. Briffault lunar goddesses become prominent in advanced periods of the culture, especially with the agriculture development[3].  It is a star related also with the magical power of women[4], as the magic practiced by Isis and Nephtys over the mummy to contribute to the Osiris’ resurrection. Because in the primitive belief the moon’s attributes are character and aptitudes of women[5], the star portrays the women’s nature, so, as reflect of the sun, the moon is the feminine complement of the king of stars, which in the mythic sphere was Hathor[6].

At this point it goes without saying the important role of this goddess in the lunar resurrection. But it helps in understanding the function of the two mourners during the mourning rite. Isis and Nephtys appear as the leading performers in the Songs of Isis and Nephtys, where the lector priest barely takes part; that ritual was something just made by women. The lunar rebirth of the deceased seems to be in large part a responsibility of the two mourners impersonating Isis and Nepthys, maybe because this relationship of women with the moon as the star that regulates their fertility and their magic. They shaked or pulled their hair, which we have already seen it was related to the moon and finally Osiris/ the deceased comes back to life when he receives the Udjat eye, the full moon. Osiris/the deceased revives as a masculine moon, but for getting that state he needs the feminine aspect of the star[7].

[7] For some scholars the Egyptian word for moon could remember the bisexuality in the creation of the world (S.Ratié, 1984, p. 179)