Hair is Darkness in Ancient Egypt.

All along this work we have seen that hair, in its different aspects, is an essential element in the Egyptian funerary ceremony. Its importance has two dimensions, ritual and symbolic and it is based on how the mourners treat it during the mourning rite and in the strong symbolic meaning of each hair aspect. Hair is a reviving tool, whose handling and symbolism helps in the deceased’s resurrection. 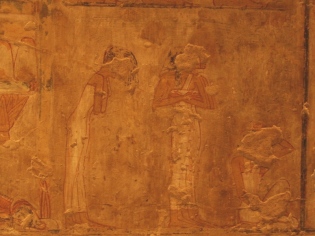 Hair sm3, whose most precise meaning seems to be the hair that comes from the crown (so the hair from its first origin in the head) is directly related in the funerals with the nwn gesture.

The nwn gesture has two variations: nwn: to shake the hair forwards covering the face with it and nwn m: to pull the front lock of hair swt/syt[1]. 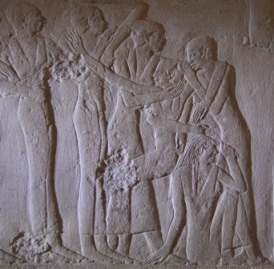 Group of mourners, one of them making the nwn m gesture of pulling her front lock of hair. Relief from the mastaba of Mereruka in Saqqara. VI Dynasty. Photo: Mª Rosa Valdesogo Martín.

The nwn gesture has a very deep meaning, negative and positive.

In Ancient Egypt belief the hair sm3 means the darkness of the death, because the hair on the face stops the mourners seeing. With the nwn gesture the women reproduce the deceased’s blindness. It is also a way of alluding to the dead person’s lack of knowledge, because not to see means not to know, it is the state of unconsciousness typical of death. The negative nature of the nwn gesture comes not only from the darkness that causes the hair sm3, but also for the evilness that it symbolizes. The hair sm3 is assimilated to the damage done to the lunar eye. The hair sm3 in the Egyptian funerary belief is the image of the disaster that caused the blindness, the evil that Seth made to the eye of Horus, the lack of moon (so the light) in the night sky.

While on earth the mourners have their hair over their faces, in the mythical sphere the Udjat eye has no vision, it cannot bright in the sky for illuminating the night. For recovering the brightness it is necessary to eliminate the evil, in the mythic dimension is when Thoth, spits on the sm3 and heals the lunar eye. The night has again its natural guide, the moon, and the moon is fundamental in all the regenerating process.

[1] In the Old Kingdom mourners pull the hair sm3; apparently it was later when the word sm3 is changed by the term for front lock of hair syt/swt.