Pulling the front Lock of Hair in Ancient Egypt. 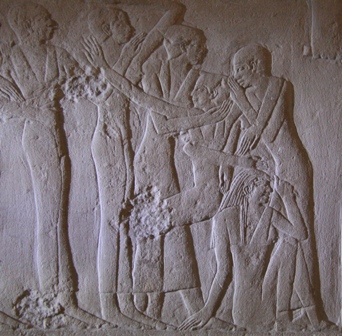 Group of mourners, one of them making the nwn m gesture of pulling her front lock of hair. Relief from the mastaba of Mereruka in Saqqara. VI Dynasty. Photo: Mª Rosa Valdesogo Martín.

In ancient Egyptian funerary ceremony mourners also made a different gesture with their hair, it was the nwn m gesture, which was to pull the front lock of hair. In fact, Egyptian language made an exercise of metonymy and the front lock of hair swt/syt was also used in many texts for designating the mourners, considering that it was their most significant part. According to some documents coming mainly from the Old Kingdom the nwn m gesture was a desperation act, since there is iconography showing mourners ripping their clothes, beating their arms and pulling their front lock of hair as a gesture of sadness. 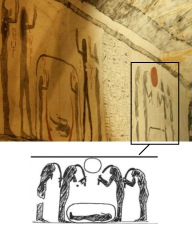 However, thanks to some sources coming from the New Kingdom it could also be a gesture made over the corpse or forward the mummy. It seems that in this case, it could be a way of transferring the life force contained in the hair to the deceased and helping in his final resurrection.

Mourners of Re pulling hair. Section two of the Book of Caverns. Tomb of Ramses VI. XX Dynasty.

But in the Egyptian belief the nwn m gesture was not only something made on earth, but also in the Hereafter. Those ones, who also mourned in the divine dimension and pulled their front lock of hair, guided the deceased with their shouts to find the way in the darkness of the death, so they helped him as well, as the mourners did on earth.

Why a front lock of hair? The forehead is a special part of the anatomy in ancient Egypt. According to one version of the episode of Horus and Seth, the lunar disk came out from the forehead of this one. We also know that Re put in his forehead the ureus, the snake which was in origin the eye of Re; the assimilation snake/eye makes us think of a triple similarity: lock of hair swt/ureus/lunar eye. If, as we have seen in this work, eye and snake are closely bound to the idea of resurrection, the front lock of hair might also have regenerating nature. That would reinforce the idea of the nwn m as a gesture made for the benefit of the deceased.

On the other hand, Egyptian writing shows us the image of the enemy as a man making what we could understand as the nwn m gesture. We have seen the relationship between hair and enemy in the figure of the human victim in the Sed festival (tekenu) and also in the scenes of the Pharaoh killing the enemies of Egypt while holding them from their hair. The idea is that the front lock of hair swt could also represent the adversaries or the evil the deceased needs to eliminate for having access to the eternal life.

As in the case of  the nwn movement of shaking the hair sm3 forwards, we notice that the nwn m gesture of pulling the front look of hair swt/syt had a negative and positive value, since it was a proof of sadness and consternation but also something made for helping in the deceased’s resurrection.

2 responses to “Pulling the front Lock of Hair in Ancient Egypt.”