The Rite recalls the Myth. The Hair gives Breath of Life and Virility in Ancient Egypt.

The whole funerary ceremony is full of practices that recall the mythic death and resurrection of Osiris and the mourning rite is not an exception. The legend tells how the goddess Isis, when mourning the death of her husband, became a kite and put over the mummy of her husband; flapping her wings she could give the breath of life to Osiris and helped in his reanimation. In this work we have seen that there is also in the thought of ancient Egypt an assimilation between hair and feathers, therefore the nwn gesture of the mourner shaking the hair sm3 forwards the corpse could be interpreted as a way of producing the air that the deceased needs for breathing and coming back to life.

Isis as a kite flapping wings over the corpse of Osiris. Relief from the temple of Seti I in Abydos. XIX Dynasty. Photo: http://www.common.wikimedia.org)

Changing into a kite, Isis could also restore Osiris’ virility. Egyptian funerary texts claim that when the mourners (smwt) give their hair sm3w to the deceased, he impregnates those women. It is interesting to notice that the Egyptian year started with the inundation (season of akhet), which was announced in some rituals (also the funerary one) with the nwn gesture, and the first month of that season was called, which means « inebriation ». On the other hand, the reduplicated form of txi is txtx and means “to dishevel”. 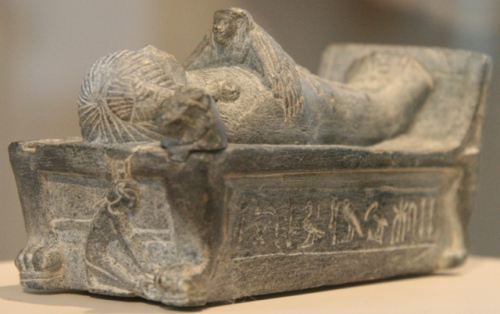 Isis as a kite is over the body of the dead. Statuette of prince Tutmosis, son of Amenhotep III. XVIII Dynasty. Altes Musuem (Berlin). Photo: Mª Rosa Valdesogo Martín.

When the Egyptian mourner was making the nwn gesture during the Opening of the mouth ceremony, she was making a symbolic movement with her hair sm3 recalling the episode of the Osiris legend when Isis over the mummy restored the virility of her husband and copulated with him.

Opening of the Mouth ceremony; on the right the mourning is making the nwn gesture forwards the mummy. Tomb of Renni in el-Kab. XVIII Dynasty. Photo: http://www.osirisnet.net

The ejaculation of Osiris was a very important step in the myth because it was a proof of his physical regeneration; in fact the virility is in Egyptian sacred iconography a resource the artist had for indicating the resurrection, since he represented the deceased with “penile erection”. It also granted the conception of Horus, his heir, his avenger, the one who eliminated the evilness and restored the order, succeeding to the Egypt’s throne and allowing his father Osiris to revive as king of the Hereafter.

Hair and Death in Ancient Egypt: Pulling Hair also in the Hereafter.

Mourners of Re pulling hair. Section two of the Book of Caverns. Tomb of Ramses VI. XX Dynasty.

Not only on ancient Egyptian funerals were mourners shaking or pulling hair. Also in the Hereafter, supernatural beings were responsible of these kinds of practices. Book of Caverns show in the second section the god Re with head of crocodile walking towards nine divinities that hold their front lock of hair, the text says:

“Oh! The one who mourns, big of lock syt and of strong cry in the West protect the king.

“Oh! These nein gods that mourn for Osiris, that cry for that one who is in front of Amduat.

Oh, look at me! I am walking towards you I pass by your caverns I call you and you scream to me. Duaty, he feels happy with your voice, those ones who mourn in Duat, the ones with secret faces, under you lock of hair syt[2], your voice is for me. I call you together , I light you up[3], mourners…you lead me and I walk towards you[4], I really protect your souls, I make you have my light, I take away the darkness that is on you…big mourners, having goods, you who are over the lock of hair syt in the land of the West . I walk on the ground I came from in my first birth”.

In the Duat the iakbyw (mourners) work for the regeneration of the dead god Osiris, crying and holding their locks of hair. And at the same time, that resurrection provides protection and light for their souls . When the deceased is in darkness the mourners are “under the lock of hair” covered with this hair:

When the deceased revives  and can walk in the Duat, the expression is just the contrary: “over the lock of hair” :

They are not anymore under the hair, but they have come to the light and the dead is “happy with the youth of his body”

The words syt and swt describe the front lock of hair the mourners pull. We find also the term syt in The Coffin Texts in chapters 799 and 532, where tells about « tying the lock syt in Heliópolis the day of cutting the samt » and in several documents from the New Kingdom we also can read how a male characters are the mourners of Re and hold their lock of hair syt/swt[5] they grant that Osiris can be justified in the Hereafter [6]. At this point it is also interesting to say that in the chapter 339 of the Coffin texts, the day of the resurrection of Osiris is the day of “shaving the mourning women”.

Again, also in the Hereafter, the nwn m gesture is a part of the mourning rite, as a sign of pain but also as a way of making the dead revive and make easier his way in to the Hereafter.

[1] . Pay attention in the word used for moan (samt), which has de determinative of the hair. In the cenotaph of Seti I in Abydos we read: “Oh! The one of the hair, over his moan, who puts his voice, to whom the souls call”

[2] . Piankoff translated the preposition  as “carrying” the locks syt.  But the first meaning of that preposition is “under”. If we take the sentence as “under the locks of hair syt” it made sense with the previous expression: “of secret faces”, so, “hidden under the hair”.

[3] The light comes after the darkness of the death.

[4] Mourners guide the dead with their screams. The deceased is blind (dead) and on the way to the new light (new life).

Posted in 02. HAIR AND MOURNING WOMEN